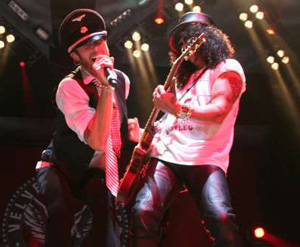 Velvet Revolver founding members Slash, Duff McKagan, Matt Sorum and Dave Kushner announced last April 1, 2008 that they were parting ways with singer Scott Weiland: “This band is all about its fans and its music and Scott Weiland isn’t 100% committed to either,” said Slash. “Among other things, his increasingly erratic on-stage behavior and personal problems have forced us to move on.”

Billboard recently reported that Scott Weiland will announce a full set of tour dates with his old band, Stone Temple Pilots. With Scott Weiland officially out as singer, Velvet Revolver has returned to the studio to record some new material. Bassist Duff McKagan reported on the website for his side project, Loaded: “I just left Matt’s where we laid down 12 new jams.”

Velvet Revolver has not yet introduced a Weiland replacement, however Slash mentioned the band has some people in mind, but he didn’t want to start “naming names.”