This is by no means one of those “best distortion pedals of all time” lists, but a list of distortion or overdrive pedals that are now considered classics or legendary. All of these pedals have been around for decades and have been used by pop, rock, blues and jazz players alike. The sound of these stompboxes has influenced the pedals that came later as well as a new generation of guitar players (these pedals even have their own Wikipedia entry!). Most have also been modified by boutique pedal builders like Robert Keeley and Analogman, and luckily they are all still available for sale.

The first Tube Screamer was made in Japan in the late 1970’s. The Tube Screamer circuit has been copied by many pedal manufacturers. The most popular use of a Tube Screamer is to push a tube amp to make it overdrive more. Notable users include Stevie Ray Vaughan, Kirk Hammett, The Edge, Scott Henderson and John Mayer. 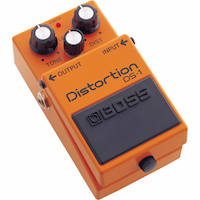 The DS-1 has been manufactured by the Roland Corporation under the brand name Boss since the late 1970’s. Notable users include Kurt Cobain, Joe Satriani, Mike Stern and Steve Vai. 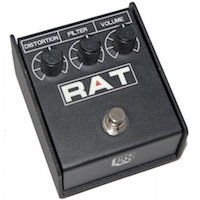 The original RAT was developed in Kalamazoo, Michigan in the late 1970’s. It became very popular in the early 1980’s and it’s still used by many players today. Notable users include Nuno Bettencourt, Robert Fripp, John Scofield, Kurt Rosenwinkel and Dave Grohl.

The Big Muff was produced in New York City in the early 1970’s. Called a fuzz by some, distortion by others, it’s so legendary it had to make the list. The Big Muff was found in countless guitarists’ pedalboards of the 1970’s like Jimi Hendrix, David Gilmour, Carlos Santana and Frank Zappa. It’s still used today by many players like Jack White and Dan Auerbach (of The Black Keys). 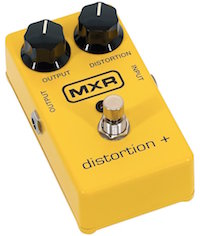 Originally designed in the 1970s by MXR. The “MXR Distortion Plus” has only two knobs. Notable users include Alex Lifeson, Randy Rhoads, Jerry Garcia, Dave Murray and Thom Yorke.