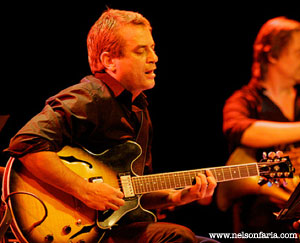 is Ricardo Silveira’s seventh solo recording as a band leader and the follow-up to Noite Clara, which was nominated for a Latin Grammy in 2004. Born in Rio de Janeiro, Silveira grew up listening to bossa nova and samba, the music of his country. He has played guitar on hundreds of recordings over his almost 25-year career (with Elis Regina, Milton Nascimento, Gilberto Gil, Gal Costa, Ivan Lins, João Bosco and Chico Buarque among many others) and has earned the reputation of one of Brazil’s most respected guitarists and musicians.
Outro Rio, which means “another river” in Portuguese, is a Brazilian rooted contemporary jazz record containing various influences. One can hear traces of Silveira’s native land as well as from other parts of Latin America. The mark that American jazz has left in his playing is also obvious. From ECM tunes, to traditional Brazilian and Latin American landscapes, that’s what you will find in this record. Why Silveira is not more known in the US is beyond me. It’s clear that he measures up with the likes of John Scofield, Bill Frisell or other contemporary jazz guitarists of the same level. From acoustic guitar, bass and drums trios, to tunes with electric guitar, piano, sax, clarinet or percussion (including a track with a singer), Outro Rio is definitely a must have for any jazz guitarist.

“I play from a Brazilian point of view, but not traditional Brazilian music. There are elements of funk and jazz, but I don’t like to say that I play fusion. I’m just a musician that likes a lot of different kinds of music and I feel it’s great to have those musical worlds to explore“.