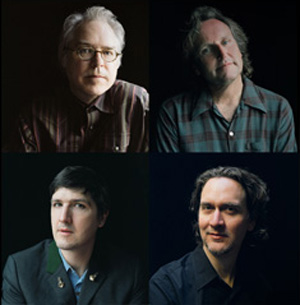 Floratone is a collaboration between Lee Townsend, Matt Chamberlain, Bill Frisell and Tucker Martine. The album, of the same name, contains eleven tracks and was released in August, 2007 (which somehow I missed). Floratone also features bassist Viktor Krauss, cornetist Ron Miles and violin/viola player Eyvind Kang. The genesis of the unique, two-year Floratone project came when Frisell hooked up to jam with Matt Chamberlain, best known for his background in pop music, including two longtime associations with pop singer-pianist Tori Amos and the jazz-funk band Critters Buggin. The pair, both based in Seattle, had talked over the years of getting together, to lay down free improvisations of their musical conversations. After they finally found time in their schedules to commit in 2005 to a session in Seattle, they turned the tapes over to Townsend and Martine, who took the raw material and sculpted songs.

Townsend likens the experience to a laboratory experiment. Martine, seconds that assessment. “We did some extreme editing, with a lot of cutting and pasting,” he says. “We found the strongest bits, edited them all together as compositions and made a CD of 18 tracks that we sent to Bill and Matt.” Frisell agrees. “It was a convergence experience,” he says. “Just Matt and me getting together for a weird jam session was one thing, but to have Lee and Tucker come in and make something of what we had done was like synchronicity. I couldn’t help but think of Miles and Teo, the playing over and over and then sorting things out.” From there, the project moved into new phases of development. Frisell invited Viktor Krauss to lay down the bass lines. Then the guitarist wrote horn and string parts to build the pieces with a harmonic heft.

Check out www.floratone.com for audio previews and a video explanation by the members of this project.