The Police 30th Anniversary reunion world tour will kick off this May 27. The legendary trio will start its North American tour at Vancouver’s GM Place and travel through different cities in Canada and the United States until early August, and will be back again for a couple of concerts in November after the European tour. The tour sold out almost immediately in all centers but tickets are still available in some cities. Check the schedule for more information. “We’re still getting our act together and finding our groove as a band,” Stewart Copeland said in an interview to the New York Post. “Last time we toured together, we were 24 years old. After all this time [apart], we had a lot of melding to do. We can see and hear where our weaknesses are and what we need to work on.”

Andy Summers, Sting and Stewart Copeland had made a few impromptu reunions at parties and weddings, but it appeared that a full-scale reunion was out of the question.”It was harder to get back together than any of us thought it would be,” Copeland says. “Sting, Andy and I have each been master of his own universe for more than 20 years and we’ve not used to collaborating.” The Police will celebrate the 30th anniversary of their recording debut with their first double-disc CD ‘Best of’ collection entitled, The Police (A&M/UMe), to be released June 5, 2007. 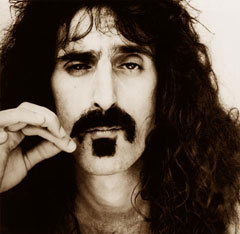 In 1973 and 1974 Zappa recorded “Overnite Sensation” and “Apostrophe(`)”, which would later become two of his most popular albums. Containing classic tracks like: “Don’t Eat The Yellow Snow”, “St. Alfonzo’s Pancake Breakfast”, “Dirty Love”, and “Montana”, these albums exemplify Zappa’s distinct creative voice and musical genius. Just some days ago, a 97-minute documentary was released on DVD, that focuses on these two early seventies albums (Frank Zappa: Apostrophe / Over-Nite Sensation DVD

). The documentary features interviews with Dweezil and Ahmet, daughter Moon, and wife Gail Zappa, as well as interviews with Billy Bob Thornton (yes, you heard right), Alice Cooper, guitarist Steve Vai, Rolling Stone critic David Fricke, and many of Zappa’s closest associates and collaborators. The DVD features excerpts from: “Dinah-Moe Humm”, “I’m The Slime”, “Montana”, “St Alfonzo’s Pancake Breakfast”, “Dirty Love”, “Cosmic Debris”, and “Stink-Foot”. In addition to vintage archival clips of Zappa discussing his music and career, and home movies of Zappa’s band on tour during the mid-1970s, the DVD also includes the performance of “I’m the Slime” on Saturday Night Live in 1976 and live footage of a 1973 performance of “Montana”. Zappa’s studio process is revealed when Dweezil and Joe Travers (“Vaultmeister”) sit down at the mixing table to analyze the master tapes of classic Zappa tracks. 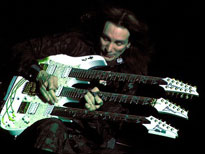 Steve Vai fans will be glad to know that tickets for the “EVO Premium Experience” are currently on sale. This will allow some fans the opportunity to see Steve Vai and his band prepare for a show; along with the ability to ask him questions in an “intimate group discussion” as his site states. Of course, availability is limited for each show, so you better hurry up if you are interested.